The Legend of Big Foot in Snohomish County 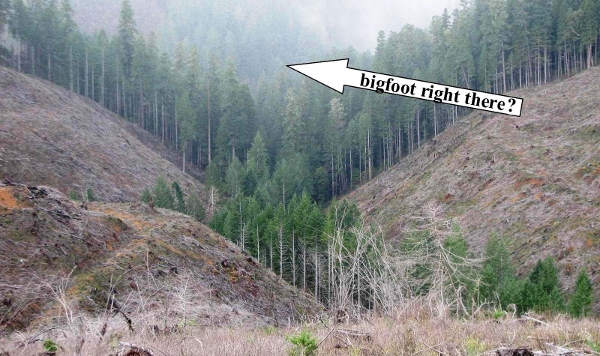 One of the biggest mysteries of the 20th century has been the legend of Bigfoot and Snohomish County, as well as the Pacific Northwest, is no stranger to this mythical creature. While many local reports claim to have seen Bigfoot most are just written off as crack heads staying up for days seeing shadow people. If you have been a resident of Snohomish County for some time then you may have heard stories and/or have first hand accounts. There were even bumper stickers floating around saying “I saw Bigfoot in Smokey Point”. Not sure if those are even available anymore.Well I am not hear to prove nor disprove claims of Bigfoot but just to share what I’ve found when exploring the County’s Bigfoot history. One of the earliest reports found was from August 1977, near Hannan Lake – Monroe area – and the story goes:

"A creature was standing in knee deep water in the back of the cove facing outward but bent over splashing water on its chest the way a person tests the temperaure before getting in. Someone said “WHAT IS THAT?” Altogether the boaters looked to shore and the creature straightened and looked directly at them. Without hesitation or hurry it turned and walked out of the lake and into the woods. The boaters rowed over to the shore intending to see what might be found. They abandoned the effort when the boat got into murky, weed choked water. The shore was covered by dense trees and was creepy under the circumstances. The sighting distance was about 100 yds. – BFRO.net"

Since then, BFRO.net has accumulated many Bigfoot sighting within Snohomish County, and coincidentally, and 35 years after the 1977 report comes a report dated August 2012. A Army vet and his girlfriend were camping off The Mountain Loop Highway, similarly to the 1977 report, when they heard splashing in the nearby river – could this be a Sasquatch bath? – when other campers almost collided with the hairy beast as it crossed the highway.

Other reports discuss rocks and sticks being thrown at them, which is said to be a Bigfoot characteristic, while on Green Mountain and Heather Lake Trail, vocalizations near Verlot and Poodle Dog pass outside Monte Cristo, history of events in Stanwood, and much more. All the report noted in the post can be found on BFRO.net’s Sno. Co. page.

Also, BFRO is planning an expedition to the Cascade from July 25th – 28th – check their FAQ’s page.

Have you or friends every seen, heard, and/or experienced something unexplained in the Cascade Mountains that is not like nature as you’ve seen it? If so, I would love to hear your tails of Bigfoot.

I enjoy your website and reading the accompanying accounts. To be honest, I dont know if I believe. But I dont ridicule or write anything off. I dont have a bigfoot account to relate, but I do have a ufo sighting that happened near ( I think ) some bigfoot sightings. I live in downtown snohomish. 2 summers ago I was leaving a party from a friends house. It was about 8 30 pm and me and my wife were heading down Machias road. Machias road is a back way between Lake Stevens and snohomish. To the east of Machias is lake rosenger and panther lake and several other lakes. We were on machias when I looked over to east and saw 3 lights In sky. They each moved independently and had no shape. They were just balls of light. I was so perplexed I pulled over and shut the car off. I didnt hear anything. As I watched a 4th light camee out of the tree line and went straight up. It was brighter than the others. They each seemed to float on air currents and went away in 5 min. I called a friend who was still in lake stevens and asked him to look In the sky, he saw it too. And my wife. I dont believe in aliens, but I do not know what I saw. Maybe a natural phenomenon? It wasnt a chinese lantern. I know that. It wasnt a flare, case a flare rises fast and then falls. these rose slowly and only ascended. Just thought id share if it interested you. Feel free to contact me if you like.

Hi Blake, I am with you. There are so many Bigfoot stories that border truth and fiction and so many accounts with no hard evidence. Nice account and I've too seen lights, above the Puget Sound viewed from south Marysville, that I too cannot explain. About 10-12 years ago, there was a sighting of lights, approx 12 lights is all traveling up the I-5 corridor and many of us seen them. Super strange and it went unexplained and now mostly forgotten. There are a lot of YouTube videos, from our area, with strange lights and images of the unexplained.

I have a son in Evrett , and live just north of Dallas Tx . He isot a bigfoot enthuseist like me .

Reports continue to surface in the area.